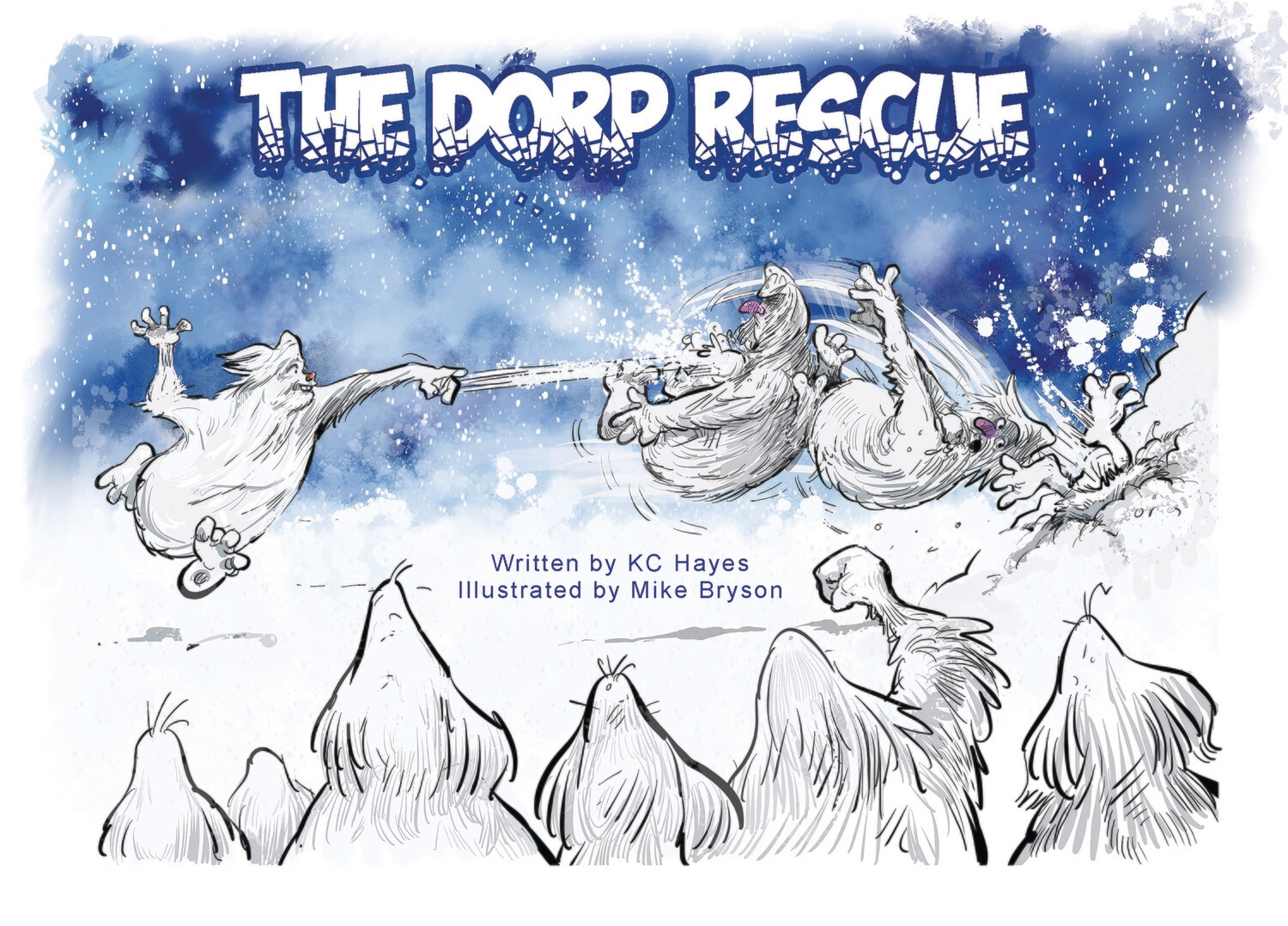 AVAILABLE FROM - 10/05/21 - Dorps are charming chubby little creatures, just over two thirds of a metre high and covered from the tip of their toes to the top of their little pointy heads in thick straggly white fur. They have long arms and large hands, short legs and wide-splayed feet – all the better for walking on deep snow. The only thing that sets them apart from Dorp copy-cats, is a tummy pouch in which they carry their food for the day.

When the small village of Dorpington is attacked by King Spink's terrifying, fearsome henchmen, the Stompers, it can mean only one thing - the villagers have all been dragged-off to work as slaves in the evil King's mines.

The only two surviving Dorps - Dongal and his little friend Doodle, are left with no-choice - they must set-off immediately on an amazing adventure to rescue their friends and families from the Stompers, armed only with their wits and... snowballs!

A fantastic childfren's picture book suitable for children aged 4-8, written by KC Hayes and with fabulous illustrations by Mike Bryson.

It starts with a snowball fight. There’s a couple of snowball fights in the middle, and it ends with a massive snowball fight! So what’s not to like, for snowball fight fans? There’s more, of course. The Dorps are loveable characters, who are pitted against the fearsome Stompers, and our heroes Dongal and Doodle have their work cut out to rescue their Dorp people from a terrible fate at the hands of the Stompers. Lots of fast-moving action and amusing chatter make this a good, fun read. The illustrations are worth mentioning, too. Mostly rendered in attractive black, blue and white, with touches of reds and oranges where necessary, the characters bear resemblance to Dr. Seuss, which can’t be a bad thing. Great reading for 7 to 10 year olds. The Dorp Rescue is definitely worth investigating.
Hunt Emerson

Far, far away live some very likable creatures with white furry bodies and pointy-heads. These little creatures are The Dorps. Their habitat is a magical snowy landscape, and they live in a place called Dorpington. Haven't you ever heard of it? Anyway, Dorpington is attacked by the evil Stompers. The whole family of Dorps, in fact, the entire village, has disappeared! A pair of unlikely heroes, Dongal and Doodle, the only Dorps who seem to be left in this snowy wilderness that remains, go on an adventure. They travel across the snowy land, filled with obstacles and dangers to find out what has become of their home and their families. Why have The Stompers attacked, where have they taken everyone, and what has become of them? Author K. C. Hayes has created a fun, exciting, entertaining story with cute, endearing characters. We are shown that when friends team up together, and they are loyal and brave, they can win the day. The growing relationship between the two travelers warms readers' hearts. The characters grow with the story like a snowball gathering momentum. Readers will find themselves rooting for these caring, daring snowballing adventurers whose hearts are in their heads. An enchanting read for all ages!
SUZY DAVIES – GOODREADS

What a charming book! Get lost in the sensational snow-filled world of The Dorps, and experience an imaginative, thrill-packed, hilarious story like no other. This is one awesome adventure with cool characters to melt your heart. Join Dongal and Doodle Dorp as they face danger, dismay and distress to bravely save the villagers of Dorpington. The combination of perfect pictures and wonderful words will hit you like a dorpthrow snowball! Grab a blanket and a mug of something warm, and snuggle up with The Dorps. It’ll be the best thing you’ve read (until their next adventure...)
CHRIS WHITE

Will the Dorpington race escape the clutches of the evil Stompers? Or might they be fed to the Dorp eating Trungle? This intriguing tale of bravery versus tyranny is utterly enthralling and entertaining. An invitation into the wonderfully weird world of Dorps, Stompers and so much more.
JEMMA BUNTIN

I really enjoyed this story and the accompanying illustrations which are perfect for younger children to enjoy as the story is told. The world created is magical… The plot moves at a fast pace, which I think will be great for keeping younger children engaged… It’s a brilliant adventure to read with your child.
LOVEREADING4KIDS.CO.UK

THE DORP RESCUE by KC HAYES and MIKE BRYSON is a brilliant and adorable read filled with myth fairytale and gorgeous illustrations. Your children will love it!
OWEN HOLLIFIELD

Save this product for later
Display prices in: GBP

KEEP UP TO DATE WITH VENTORROS PRESS